Posted as a crime because N. Korea is a crime all by itself...

SEOUL, South Korea - North Korea, a hermetic country stuck in the Cold War and obsessed with its long-dead founder, now wants to turn back time.
By a half-hour.
The government announced on Friday that it would create its own time zone - "Pyongyang time" - and set its clocks 30 minutes behind those of South Korea and Japan. The change is set for Aug. 15, the 70th anniversary of Japan's defeat in World War II, which freed the Korean Peninsula from Japanese rule.
The current time on the peninsula - nine hours ahead of Coordinated Universal Time - was set by Japan. North Korean public pronouncements can be as virulently anti-Japanese as they are anti-American, so it was natural that the clock change would be billed as throwing off a hated vestige of colonial domination.
"The wicked Japanese imperialists committed such unpardonable crimes as depriving Korea of even its standard time," the North's state-run Korean Central News Agency said on Friday. Continue reading the main story South Korea has its own historical grudges with Japan, but the time of day is not one of them. Jeong Joon-hee, a spokesman for the Unification Ministry in the South, said that following Pyongyang's lead now would be confusing and expensive for a country that, unlike the North, is thoroughly integrated with the global economy. Continue reading the main story 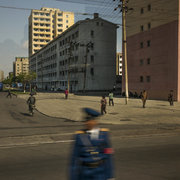 Mr. Jeong said the time change in the North would probably create only minor communication problems, notably at the inter-Korean industrial park in Kaesong, where South Korean managers oversee North Korean workers. But down the road, he said, "this will disrupt our efforts to integrate the South and the North and restore our homogeneity."
Japan is widely resented on both sides of the border, but the North enshrines its hostility toward Japanese and other foreign "imperialists" in its Constitution and puts the resentment at the core of the country's ruling philosophy of "juche," or self-reliance. The founder of North Korea, Kim Il-sung, fought as a guerrilla against the Japanese before independence.
Mr. Kim died in 1994, and his grandson Kim Jong-un runs the country now, doing whatever he can to highlight his ancestry, even imitating his grandfather's hairstyle and the way he held his cigarettes. His grandfather's rhetorical themes are invoked to justify policies like maintaining an enormous military and developing nuclear weapons.
Chang Yong-seok, a North Korea expert at Seoul National University, saw the clock change in the same vein.
"With the new time zone, Kim Jong-un is reasserting his code words of self-reliance and national dignity to his people," Mr. Chang said. "Whatever difficulties and inconveniences the new time zone may cause are nothing to his government, compared with its propaganda value at home."
The Japanese government offered no response to the North's announcement, but the Japanese news media pounced on the news, including Pyongyang's accusation that Japan "stole Korea's time." Some Internet users offered amused criticism. "Why did they wait 70 years?" several asked on Twitter.
The North's new time zone is actually an old one. Korea briefly set its clocks that way before it was annexed by Japan in 1910, around the time when countries the world over were establishing standard time zones. South Korea went back to it in 1954, then re-adopted the present setting - the same as Tokyo's - in 1961.
South Korean officials said one reason was that American troops stationed in Japan and South Korea would be using the same time if war broke out.
Wang Sheng, a professor of international politics at Jilin University in China who focuses on the Korean Peninsula, said he did not think the shift would disrupt what little international trade the North has. And he noted that it would put the country's clocks just a half-hour ahead of China's, instead of an hour. "Looks like North Korea is getting closer to China," he said.

Joined Jul 13, 2010
·
7,237 Posts
The only person this would effect is Hillary Clinton when she goes to Little Kims taylor shop for a new Little Kim pants suit....
O

Joined Jul 31, 2014
·
1,754 Posts
I will file this information under "ignore" since it will never come in handy, except maybe in a trivia game. I guess, this is just another attempt of the dear leader to inject some pride into the hungry nation. Guess what, now they will be hungry and half an hour late, or half an hour early, I forget. This is beyond ridiculous.
1 - 10 of 10 Posts